From prop drilling to framework drilling

There are in general two ways to learn something - observing either its effects, or its core. Learning languages/frameworks in application and their internals would be a parallel.

One of my constant gripes over the last year in particular is the lopsided ratio. For 100 React + Redux + the rest videos, there is at best a half video about its internals. After all, as they say, market demands ought to be the yardstick for supplies; for any brand.

Silly forewords aside, ended up by chance at a thought a while back on something that might aid me, with the latter. Trace-back driven learning, as I call it, is how I plan to take things ahead.

Was playing around with the Context API to avoid prop drilling working with siblings. Between Context/Redux/MobX this sounded the easiest to start with. Voila, beginner's luck wasn't exactly around me as expected; a trace back staring at me. 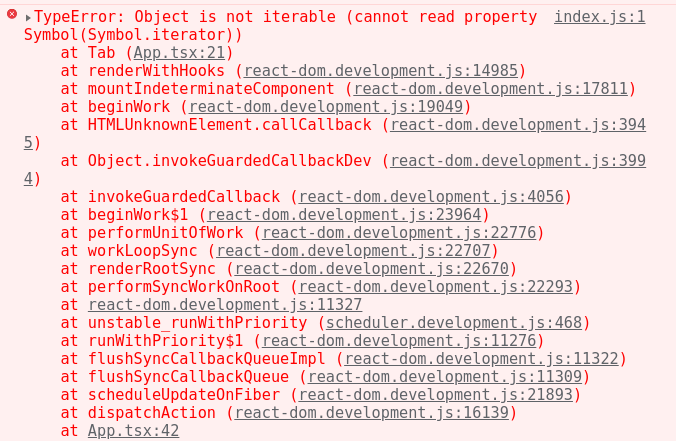 The trace-back above gave an insight into what I've been both lazy at times and clueless about. A particular question I had for long was how React fiber works under the hood. Yes, reading through source is the best way, but where does one start? Not to mention, the rabbit holes that are aplenty in a large enough code base.

Guess, I finally have a way to address the issue - the trace back leads me from the failed Context call to the root of fiber. And the second of my rabbit holes in the recent past and hoping this one would be as helpful as the other has been.